Speaking the Same Language: Globalization and the Role of Technology

Anyone involved in business over the last decade has probably been (over)exposed to certain recurring themes - ‘digital transformation’, ‘internet of things’, ‘big data’. But there’s one, transformative theme that underpins and drives them all - globalization.

Globalization is not new

We can see a major increase in global trade from the 1950s, what is new is the speed with which the world has changed. From 1800 to 1950, trade growth was pretty much flat. From 1950 to 1980 worldwide trade increased by a multiple of 10. However, from 1980 to 2010, that number grew astonishingly, to a multiple of 35. What makes this even more interesting is that by 1980 international trade had become global trade – in the decades following world war two, trade had been mostly between developed industrial countries, specifically Western Europe and North America – by 1980 this was all changing, with developing countries becoming a huge part of the picture.

In recent years there’s been something of a backlash against globalization, typified by mass protests during the G8 and G20 summits, but now gaining more mainstream political acceptance, illustrated by more isolationist policies such as Donald Trump’s ‘America First’ philosophy.

This increasingly global market brought widespread benefits –  increases in GDP, improved standards of living, access to new markets. In recent years, there has also been an acknowledgment of the downsides, with more developed nations struggling to compete on metrics such as workforce costs. However, one of the challenges which is rarely discussed as a factor in global trade is one of the most fundamental – communication.

A truly global market means this – you’ve got 7.7 billion potential customers, spread over 195 countries, speaking an estimated 6,500 languages. To be fair, half of the world’s population speaks just 23 languages, but still – do you speak 23 languages? The question is this – how to effectively communicate in a market with an increasingly diverse workforce and customer base? 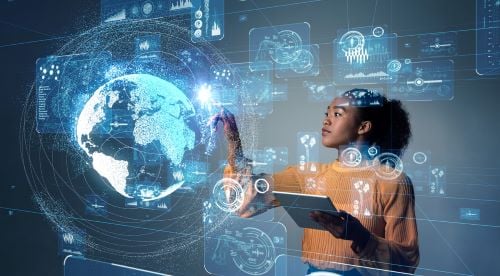 In practical terms the question is even simpler – how do you offer customers (and colleagues) the support and information they need, when they need it, when they might be in another country, speaking a different language?

Video conferencing software offers part of the solution, allowing face to face, immediate communication that eliminates geographical barriers. But what if the conversation is about a highly technical support issue? What if, say, you need to explain to a customer how to fix a piece of complex industrial equipment? And what if you only share a few words of a common language? And none of them is ‘spanner’?

The answer lies in augmented reality.

XMReality’s Remote Guidance lets you show the customer how to fix their issue. The customer simply points their phone or mobile device’s camera at the problem and you can with gestures, drawing-on-screen, or other tools show them what to do, step-by-step. Since you can see exactly what they’re doing, guiding them along the way, there is no chance of a ‘lost in translation’ moment. It’s literally like standing by their side, holding their hand.

For better or for worse, the days of ‘local business for local people’ are behind us, particularly in the service industries. Your customers can be anywhere, speaking any language and they need your help 24/7 – and they need it fast. There isn’t always time to travel there in person – and that travel may not even be necessary. An intelligent remote guidance solution is a win-win – faster issue resolution, reduced downtime, happier customers, less unnecessary callouts, lower environmental impact, and a better bottom line.

Is that speaking your language?

How the food industry can turn a challenge into an opportunity

XMReality Remote Guidance is an easy to use video...

Video Calls vs. Remote Guidance - the Pros and Cons For Each

Frequently we get the question, “Why do I need your remote...